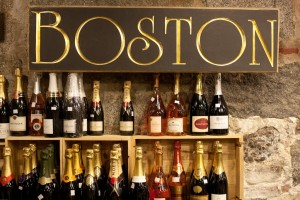 Boston’s got its plethora of tours: from Duck Boats to Old Town Trolleys, the Freedom Trail to Boston by Foot, there are plenty of ways to explore the history of this city. But besides the standard tourist destinations, what can you really learn about your city from a trip down the Freedom Trail? We’ve been told the tale of Paul Revere and his midnight ride for decades, and Bostonians are itching for something new.

Just in time, too. A new breed of tours are popping up around town: food tours. These delicious tours cover a range of culinary topics — from food trucks to wine pairings to desserts — and ensure tour-goers never leave the trip feeling hungry. The food tours also explore a wide range of Boston-area neighborhoods, including Beacon Hill, Seaport District and the South End, expanding much further beyond the typical Faneuil Hall/Old North Church/Bunker Hill stops on a historical tour.

“In 2009, I was looking for a distraction from the realities of the recession,” said David Goldstein, founder of Boston Chocolate Tours. “I decided the best thing that I could do is  something that I really loved, and if I loved it, it would be easy to share with others. I decided upon food tours. Knowing how much my children and I enjoyed seeing a city through its food and neighborhoods when vacationing, it wasn’t a huge leap of faith that others would enjoy these tours here in Boston, too.”

Perhaps the sweetest of them all, Boston Chocolate Tours gives guests the option of eating their way through chocolate in six different neighborhoods, all in about two hours. 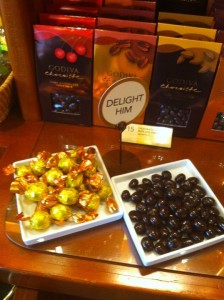 “A chocolate tour not only educates about chocolate – where it comes from, how it’s made, if it is fairly traded – but it is a tour of a Boston neighborhood and feels like a window into the world of the people that make and sell chocolate,” Goldstein said. “It introduces you to all kinds of chocolate in many forms, shapes and sizes. It is a tour for all the senses and walking helps people believe they are walking off the calories.”

City Wine Tours has a similar concept with – you guessed it – wine. New to the Boston restaurant tour scene, City Wine Tours officially opened back in May by four young guys, most of them Harvard students, and is currently sold out through December. “We wanted to turn the wine tasting experience into something people could experience at urban restaurants, hotels and cellars, all in one day,” said Christian Iannucci, the COO.

Since May, City Wine Tours has served over 1,400 guests, 100 percent of them local Boston residents. The four City Wine tour options explore the North and South Ends, Back Bay and Harvard Square and were chosen because those neighborhoods are the most attractive places to walk and, ultimately, have the best partners. “The wine tours have a historical component to them, which people here are always interested in learning more about,” Iannucci said about the popularity of the tours. Well, that, and the guests probably enjoy the two to four glasses of wine they get to sip on the tour, too. 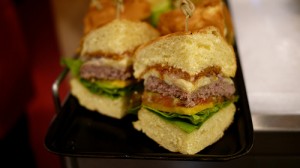 Like City Wine Tours, Audrey Giannattasio, founder of Boston Foodie Tours, is a big proponent of getting locals to come out to explore the culinary variety offered in their own neighborhoods. “A food tour allows you to sample a variety of foods at a fixed cost,” explained Giannattasio. “Most people would be unlikely to stop at six to seven restaurants in an afternoon. Even two in an afternoon is a lot!”

“So far, locals outnumber tourists. Our marketing is designed that way,” echoed Goldstein of his chocolate tours. “Now if you ask the question as to women versus men who attend our tours, that’s an obvious answer.”

Through food tours, locals get the chance to find hidden gems they never knew existed in their own neighborhoods. If you’re anything like me, you’ve passed a cool wine shop or chocolatier a million times and never ventured inside. Giannattasio assured me I’m not the first Bostonian who has passed by places like Beacon Hill Chocolates and Bacco’s Wine Cheese without stopping in. “Sometimes, unless people come on this tour, they might never go in these places. That’s why the tours are great for people who just move to a new neighborhood,” she said. 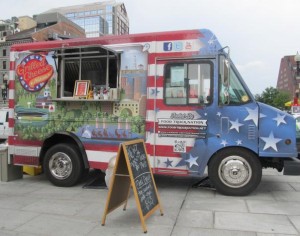 In addition to exploring neighborhoods like the Wharf District, Back Bay and Beacon Hill, Boston Foodie Tours also makes it a point to visit food trucks on the tours. “Food trucks are a huge part of the foodie community in Boston,” Giannattasio said. “They are constantly adding variety to our tours week after week.”

So what’s Giannattasio’s personal favorite Boston Foodie Tour? “That’s like asking, if I had kids, which is my favorite child!”

Goldstein echoed her sentiment, “Is that like asking which is your favorite child?” He goes on to detail all the time spent crafting his six Boston Chocolate Tours. “It was a combination of online research, on the ground walking and tastings, and really peeking our head in to shops along the way. We strive for unique locations with shops that are as interested as we are in teaching people about chocolate and proud of what they share and present.” He did tell me, though, “I do have favorite places on all of the tours and am always in search for new stops.” (We knew it, David.)

For City Wine Tours, the most popular is, by far, the North End tour for its selection of Italian wines from regions like Tuscany and Piedmont, as well as assortment of small meat and cheese platters smothered in Italian vinaigrettes. Iannucci’s favorite, though, is the Back Bay tour. “It’s posh, elegant and romantic with great settings and great service,” he gushes. 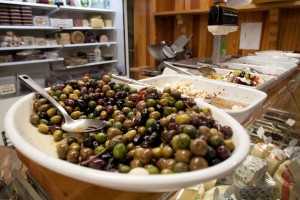 Lucky for Bostonians, all three food tour companies have plans to expand in the very near future. “Over the course of the next three months, we have about 2000 people scheduled to attend a wine tour with us,” Iannucci said, and with his sights set on other locations in New England, those numbers can only increase. Goldstein also has some ideas to further expand his love for chocolate, which will remain secret while they’re still in the development phase. Giannattasio said that for now, Boston Foodie Tours will focus on their four flagship tours, but with an ever-growing social media presence and recent name change, big things are definitely on the horizon for her company.

In true foodie spirit though, Giannattasio brings it back to the grub. “If there’s one thing you need to know, a good food tour will give you an experience you wouldn’t otherwise have.” Well said. Now I’m hungry.

Have you been on any food tours in Boston? Share your experiences in the comments!