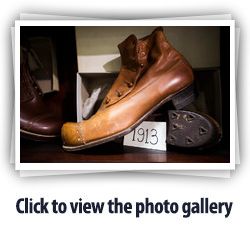 More than 100 vintage items from Hanover Shoe Company’s stores and factories are on display at Clarks Bostonian Outlet in the first block of Broadway in Hanover.

The case in the back corner of the store is a part of a diverse collection of items from the company’s history, and was started by Donald Hamme, assistant manager for Clarks, who began working for the company in 1981.

Hamme brought his collection to the public so others could enjoy the items as well, he said.

The oldest item in the collection is a gray and black, button hook, high-top shoe from around the early 1900s.

Other items of interest in the case are a white dress shoe from the 1940s, shirts that employees used to wear during shifts, shoe measures and much more.

“I have enough to fill it three times,” Hamme said. “This is what I envisioned when I started collecting.”

Hamme keeps parts of his collection at his home in Abbottstown, or on the third floor of Sheppard Mansion on Frederick Street in Hanover, he said.

Todd Weaver, a former Hanover Shoe employee, was fascinated by the case, saying how it brought back a lot of memories from his 17 years with the company.

Weaver’s memories include selling a brown leather shoe similar to one in the case that was worth $400 in the 1980s, he said. 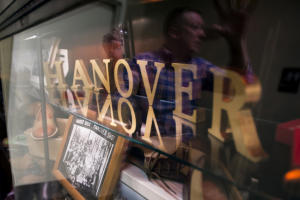 “I’m proud to have been a part of the store and know a lot of the items in that case,” Weaver said.

Hanover Shoe was founded in 1899 by Harper “H.D.” Sheppard and Clinton “C.N.” Myers. The company’s motto at that time was to provide “the greatest shoe value on Earth,” Hamme said.

Sheppard and Myers hoped to provide a quality product to their customers from the outset.

“Hanover Shoe dominated the community in employment and involvement, which they had the resources to do at that time,” said Rick King, former president of retail operations for the company. “Hanover Shoe was a driving force behind founding Hanover Hospital.”

When the hospital was founded in 1926, Sheppard and Myers made a $120,000 contribution, according to documents from the Hanover Historical Society.

During its prime, Hanover Shoe employed between 1,000 to 1,500 Hanover area residents, King said.

Other contributions Hanover Shoe made to the Hanover community include Sheppard serving as the president of The Evening Sun after it changed names from The Hanover Independent in April 1915, according to historical society documents.

Hanover Shoe’s early success enabled it to be a leader in community giving.

Hanover Shoe’s original plant on Railroad Street was enlarged and expanded in 1910 and 1951, according to a late 1970s Hanover Shoe catalog provided by Hamme.

After World War II, Hanover Shoe was a “slow adapter” to changes in America, King said.

The company lost some of its competitive advantage because their style of dress shoe was purchased less, he said.

In the 1960s, Ned Fitzgibbons, Gordon King, Paul Spears and Charles Sourber Jr. helped lead the resurgence of the company by placing retail outlets in important areas such as downtowns and big shopping centers, King said.

Hanover Shoe also added a second plant in Hanover as well as plants in West Virginia and Maryland around that time, according to the catalog.

Clarks bought Hanover Shoe in the late 1970s and switched to the Clarks name. The Bostonian label was added sometime in the 1990s, Hamme said.

“Someone else would have acquired Hanover Shoe if Clarks hadn’t bought them,” King said. “We had such a high quality of shoe that it would have happened eventually.”

Clarks has stores in more than 35 countries today, according to its website.

All of the items in the collection at the Broadway store, however, were from stores in the United States.

Hamme said he started saving shoes that would have been thrown away if he wasn’t there to claim them. He added more to his collection through purchases from eBay and flea markets, along with donations from area residents.

“Hanover Shoe did a lot for the community, everyone knew someone who worked there,” Hamme said. “So to present this in this store, it’s really great for Hanover. It’s an ongoing project that probably will never end.”

Hanover YWCA plans Walk a Mile in Her Shoes fundraiser

Hanover’s past: ‘It’s not going to be what it was’