Fallout 4 players discover that Sam Malone’s famous bar from the hit sitcom Cheers can be found amidst the Bostonian wasteland, with references to the show galore.

Fallout 4 allows players to explore post-apocalyptic Boston, and part of the fun of the game is visiting famous Bostonian landmarks to see how they’ve changed since the bombs dropped. Actual famous Boston locations can be visited in the game, such as Fenway Park, but Bethesda has also included one of Boston’s most recognizable fictional establishments as well: a little bar named Cheers.

The bar, from the very successful sitcom of the same name, is one of television’s most memorable settings, with almost 300 episodes produced over the course of 11 seasons. Out of all the Easter Eggs in Fallout 4, it’s definitely one of the more interesting ones, and it’s impressive to see how much detail Bethesda included for fans of the show.

Found in the Boston Common area in the critically-acclaimed Fallout 4, the bar, named “Prost!” in the game (which translates from German to “Cheers!”), is laid out almost exactly like the bar from Cheers, complete with the bar area, Sam Malone’s office, and more. There are various references littered around that are nods to episodes from the series, with the most obvious being the skeletal remains that can be found lying about. 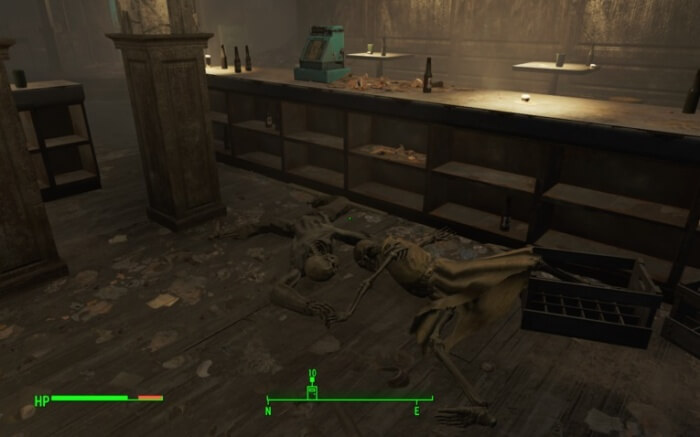 The skeletons found in the bar in Fallout 4 are clearly meant to represent the various characters from the show. Fans of the TV series will be quick to recognize the likes of Sam, Diane Chambers, the chatty postman Cliff Clavin, and the quick-witted Norm Peterson sitting at his usual stool. The other main characters can also be found in the bar – even baby Frederick – though Norm’s wife Vera is nowhere to be seen.

Little Easter Eggs like this are a nice touch, and go a long way in breathing additional personality into Fallout 4. However, the fact that Cheers has been off the air for over 20 years now makes it likely that there’s many people playing Fallout 4 that will stumble upon the bar and have no idea that it’s actually a clever reference to one of the most popular TV shows in history. In any case, it’s cool for Bethesda to include things like this in the game, even knowing that not all players will understand the reference, and it’s reassuring to know that even if Codsworth doesn’t know your name, there’s a place vault dwellers can go where everybody does.

Have you found the Cheers bar in Fallout 4 yet? What other Easter Eggs have you discovered hidden in the Bostonian wasteland? Spread the word in the comments below, and tell us your most treasured discoveries so far in Fallout 4!

Fallout 4 is currently available for PC, PlayStation 4, and Xbox One.