Margaret Waterman and her mother arrived in Paris on Friday morning for a weeklong vacation filled with restaurants, wine bars, and sightseeing.

But on Saturday, the 22-year-old Bostonian found herself avoiding the subway and major tourist sites. Hotel workers had warned her to stay away from crowded places, in case there were new attacks.

“It’s definitely unsettling,” Waterman said in an interview via Skype. “It’s strange to not feel like we can go wherever we want to go.”

As French authorities continue to assess the extent of the attacks that killed at least 100 people, Bostonians in Paris are grappling with the randomness of the violence and wondering whether the danger has truly passed.

Attempting to reassure families and friends, Boston-area colleges have sent out word that their students studying in Paris have been contacted and are safe.

Continue reading it below

The Martin Richard Foundation posted a message in French, drawn by Jane Richard, to Facebook on Saturday.

Northeastern University officials said the college’s 55 undergraduate students and two faculty members in Paris are safe, according to a statement sent to the student body. Boston College, Emerson College, and Boston University sent out similar statements.

Zachary Torres, one of the students in Boston University’s Paris program, said one of his roommates, a student from Germany, had been in Stade de France when the bombs went off during a soccer exhibition between the French and German national teams.

Torres said he watched news of the violence with his host family in Paris.

“It was confusing, seeing the streets I frequent getting attacked,” said Torres, who said he works at a cafe not far from the shootings.

Waterman and her mother have stayed close to their hotel in the fifth arrondissement, a district adjacent to some of the violence. In the streets, they said, the usual buzz of the neighborhoods has been replaced with a subdued and quiet uneasiness.

During dinner Saturday, Waterman said a waitress told her how one of her friends had been shot twice in a restaurant during one of the shootings. The unpredictability of the violence is what makes the events so terrifying, the waitress told her.

“Really anyone could be hurt in an attack like this,” Waterman said.

Both fear and relief were evident at the international arrivals gate at Logan Airport. Sue and Tony Leone of Pepperell rushed to embrace their daughter, Brooke Gosselin, who was returning from a work trip in Paris.

Thierry Bussiere, who was waiting for his cousin’s flight to land at Logan Airport on Saturday, was familiar with the shock. He was living in New York during the Sept. 11 attacks and had moved to the Boston area before the Marathon bombings.

He said he has seen communities pull together in the wake of acts of terrorism, and he believes the French people will be resilient. “People keep saying, ‘We’ll keep doing what we do, it won’t stop us,’ which I think is the right thing to do,” he said.

But Bussiere is still pessimistic about whether the violence will really pass. Referring to the Charlie Hebdo attacks that occurred in January, he said he believed that there will be more tragedies.

Alexis Lamou, who lives in Quincy, said she is afraid to return to her hometown of Paris.

While waiting for her mother’s plane to land at Logan Airport Saturday, she recalled how difficult it was to be on a different continent when the explosions and shootings began. Her family lives near the Stalingrad Metro station in Paris, a mere 10-minute drive from the Bataclan, the concert venue where scores of people died.

On Friday, she frantically sent messages to her family and friends on Facebook, which had become the easiest way to get in touch with people.

Even now, she cannot believe what happened.

“I thought it was like a dream,” she said. “When I woke up, I was like, ‘I don’t think something happened yesterday,’ so I turned on my TV and that was real. So I called my sisters, again, and they told me it’s fine.”

Her mother, Laurence Lamou, arrived Saturday, though additional security measures had delayed the plane. Laurence Lamou said she had initially been nervous to fly to Boston, but unlike her daughter, she said she won’t have any trouble returning home.

“I think it’s going to be OK,” she said in French, with her daughter translating. “If we’re scared, we’re not going to live.” 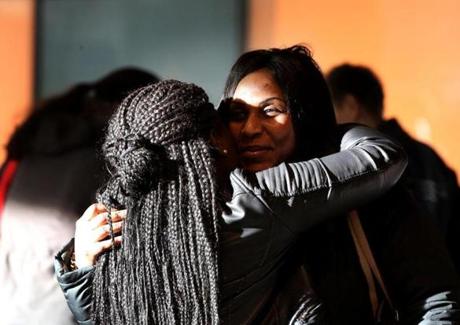