This is reason number 10 billion and counting why the people of this area love Tom Brady. And it’s something the old school wretches in the press and those bitter blobs of resentment that hate him for all his success will never comprehend, much less admit.

Tom Brady is one of us.

He comes from the one place Massholes distrust the most, California. He’s a citizen of the world who meets popes, gets invited to State of the Union addresses and his wife is a one-word-namer around the globe. But he’s become a Boston guy.

Remember when Brady and Gisele built that moated castle in southern California and all the haters got indignant, rolled their eyes until nothing but white was showing, and screamed “See? He hates it here! He’s gonna retire and move to his homeland and never look back because he’s too rich and famous to care about any of you! Stop kissing his ass!!!”?

Well what are they saying now? They no sooner moved the baby grand into that mansion before they sold it, probably for a loss, because his heart was here. He’s rather deal with horrible winters, the crappy streets that get eight feet narrower every winter, the traffic, the corrupt politicians and our general bad attitudes because he belongs here. He might not be from Boston, but he’s of Boston now. He’s a neighbor who takes the time to hand write a heart felt note of thanks to his fellow Massholes to show he appreciates the support, to make sure we know the Patriots gave it their level best and to vow they’re coming back strong. Because that is how we roll around here.

There’s only one proper way to respond to the gesture. The feeling is mutual, Tom. 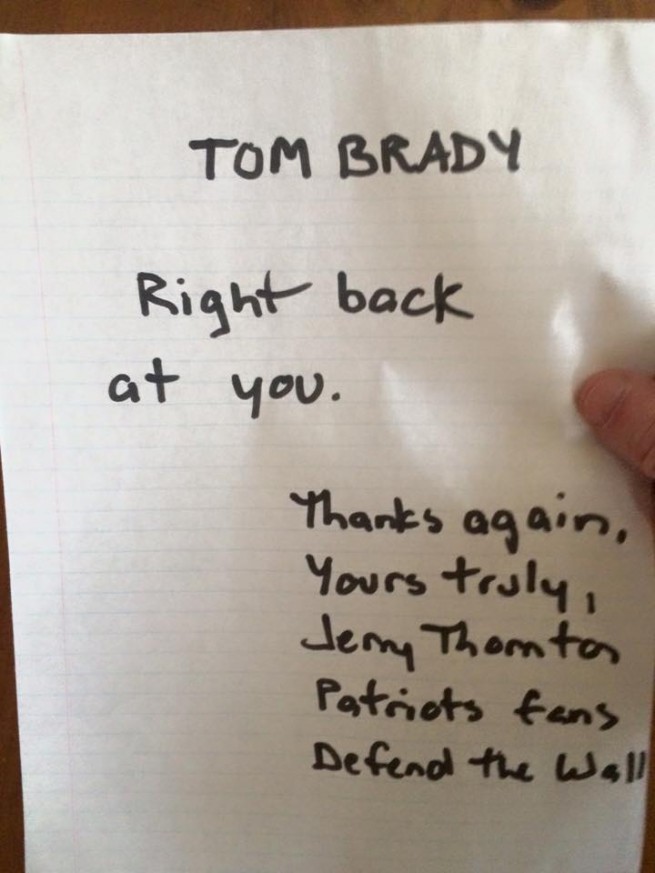 DraftKings has your shot to play for FREE in the $1 Million Fantasy Football Contest THIS SUNDAY! First place takes home $100,000! FOR FREE ENTRY, CLICK HERE.