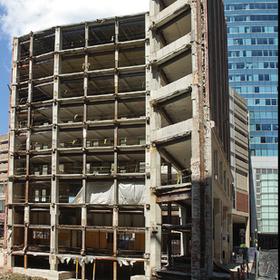 Filene’s Basement was doomed the minute the wrecking ball swung on the original Basement in Downtown Crossing.

When news broke this morning that Filene’s Basement is bankrupt for the third time, and will enter its final markdown, I looked down at what I’m wearing.

I’ve worked downtown since about 2007, and I used to stop in at Filene’s Basement almost every day after work. I think everything I’m wearing today, from a wool tie (briefly fashionable in 2008) around my neck, down to Dexter penny loafers on my feet, came from the discount racks at Filene’s Basement.

If the campaign-trail stories are true, Mayor Thomas M. Menino used to shop at Filene’s Basement, too. I never saw him there, but don’t take that personally, Mr. Mayor. Something about the big basement floor in Filene’s Basement tended to bring out the single-mindedness in me.

To some extent, Menino and the architects of urban renewal in Downtown Crossing are probably responsible for its demise. As a nationwide chain, Filene’s Basement might have shrunk or grown, but the original store drew tourists – hard to believe for anyone who remembers what it looked like.

I wonder if bankruptcy hasn’t been inevitable since the wrecking ball swung at that original store. Sure, the company always said it planned to return, but really? Without the flagship Basement in its grungy, automatically marked-down glory, what separated Filene’s from any outlet mall or inbox-crowding online deal-broker?

Now, there is one less big draw in Downtown Crossing. Forget the green- and orange-shirted ‘ambassadors’ sprucing up the district’s image. Is there any Bostonian who’s walked by the smoking hole in the ground at Franklin and Washington, who wouldn’t turn back the clock five years, and vote to keep Downtown Crossing shopworn and out-of-date?

More importantly, Boston’s never had a great reputation as a city of snappy dressers. That’s something no amount of urban renewal is likely to change. At least, with Filene’s Basement, we had some place to get good clothes, cheap.

See all your followed company news on your personalized dashboard.

To access the full benefits of bizWatch and receive a weekly email with aggregated news on all the companies you are following, please provide your email address below.